Construction began on this 815,000-square-foot distribution center in the spring of 2011 and was completed by April 2012. The Conlan Company served as the construction manager for the owner, Family Dollar Stores, Inc. This distribution center was constructed in a predominantly agricultural area that allowed for large open spaces which are needed for this type of facility. However, due to large amounts of rain early on in the project schedule and the existence of clay-encompassed, non-draining sand pockets, there were some difficulties getting the project off the ground. As a result, a combined effort was required between Patriot and Conlan engineers to come up with solutions to keep the project on schedule. 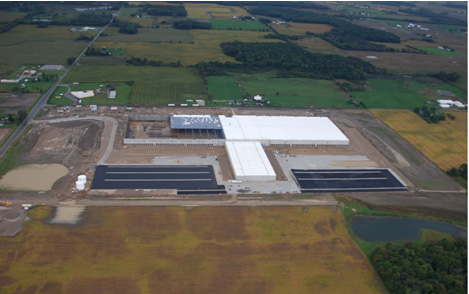 Our involvement was to test and inspect various aspects of construction. This included testing and monitoring of thrust block installation, grade-raise fill operations, structural concrete placement, and structural steel inspections. Additionally, Patriot was an integral part of maintaining a viable construction schedule throughout the construction of the heavy-duty parking areas. As mentioned above, areas of saturated sand pockets were scattered throughout the project site which created areas where the pavement section would deteriorate more rapidly if not remediated. This problem was solved by the introduction of a geosynthetic to the project through a recommendation by Patriot. The geosynthetic allowed for a “bridging” effect over the saturated sand pockets without increasing the sub-base depth in most locations.